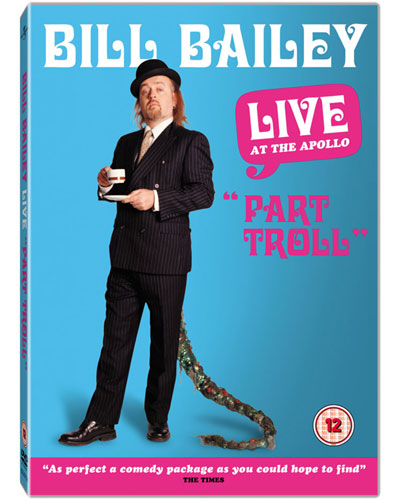 2004 saw BILL perform his hugely successful live show, Part Troll, to a massive 80,000 people following a series of added dates to his sell-out 52 date tour of the UK. Now the star of Black Books (C4) and Never Mind the Buzzcocks (BBC2) brings his hit stand-up show into your living room with the DVD release of BILL BAILEY LIVE – PART TROLL. The show was recorded live in front of a sell-out crowd at The Hammersmith Apollo in June 2004.

A unique blend of the off-the-wall comedy and music for which Bill has become acclaimed, Part Troll tells how Bill’s native West Country accent cost him a part in Lord Of The Rings and why swimming with dolphins shouldn’t be on everyone’s list of ‘top 50 things to do before you die’. Bill also explains the real reasons for our poor rail network; fluff from Saturn, dragons and Gameboy Tetris, as well as provides an insight into what actually goes on during one of President Bush’s ‘briefings’. Part Troll also features the songs, I Will Not Look At Titties For A Year and Bill’s German rendition of Three Times A Lady.