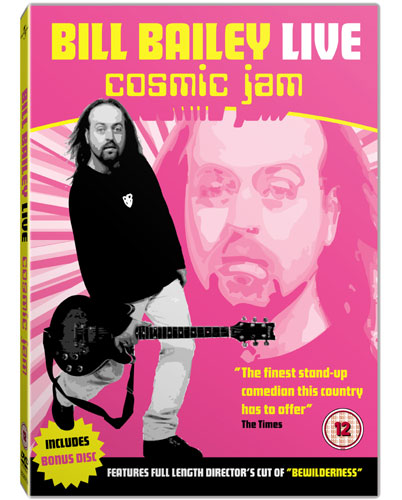 For the first time ever, fans will be able to enjoy Bill’s debut live stand up show – Cosmic Jam, filmed at The Bloomsbury Theatre, London in 1996.

In this classic show, Bill explains why Bryan Adams is perhaps the greatest ever exponent of the rock anthem, demonstrates the influence Cockneymusic has had on the great classical composers, and warns of the perils of a world ruled by insects, while playing the second biggest gong in Britain.

Full Length Directo’rs Cut of the hit show Bewilderness. Filmed in 2001, Bewilderness features Bill’s insights into the Doctor Who theme tune, wildlife documentaries, and A Brief History of Time.

A double bill of..er..Bill that no fan should be without.